José Díaz Ortega: "To create and innovate, you just need to think, and that can be done in the Canary Islands" 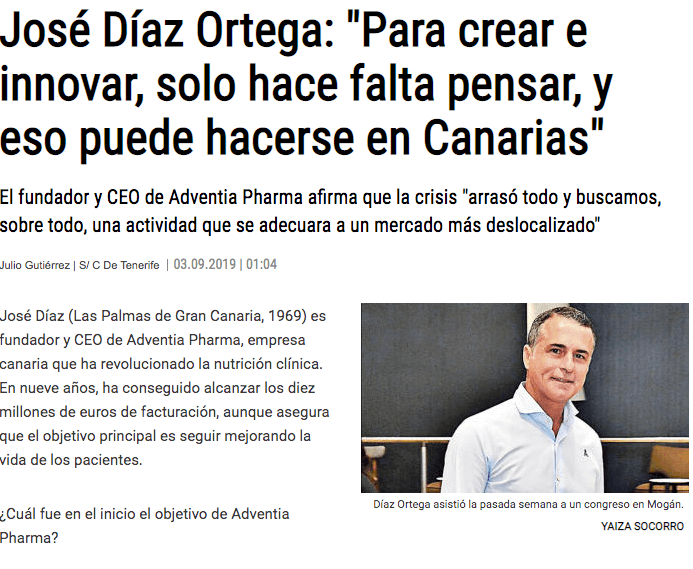 The founder and CEO of ADVENTIA PHARMA affirms that the crisis "devastated everything and we are looking, above all, for an activity that would adapt to a more delocalized market."

José Díaz (Las Palmas de Gran Canaria, 1969) is the founder and CEO of Adventia Pharma, a Canarian company that has revolutionized clinical nutrition. In nine years, it has managed to reach ten million euros in turnover, although it ensures that the main objective is to continue improving the lives of patients.

What was the goal of Adventia Pharma in the beginning?

Research and create own clinical nutrition products. We think that in a year we could have something, but the truth is that it took us two and a half or three years to have the first industrializable formulations.

What does Adventia Pharma sell?

Where is the key to outperform the competition and position yourself in the market?

When we arrive we find a very static market.

The companies that were already located sold their own formulas, very similar to each other. They told us that everything was made up and there was little room for innovation. We detected that as an opportunity, it allowed us to break in as an innovative company, not only creating a formulation, but also trying to identify and solve problems.

A system to provide enteral nutrition that led to the creation of medical devices and a digital platform to share experiences, diagnoses and useful information of all kinds. We approached the market from all points of view to change the concept, we did not want to be a company that had the only idea to sell.

How many partners were there at the time of the founding of this company?

Three. We had the disadvantage of being completely unfamiliar with clinical nutrition. Hence the audacity of trying to do new things to compete with large multinationals.

Where they came from?

Is Adventia Pharma the daughter of the crisis?

Indeed. We were practically 40 years old and the crisis devastated everything. Suddenly credit ran out, some of the largest companies in the country fell, and we were forced to reinvent ourselves, to seek new paths.

What factors played a role in choosing that new path?

Above all, that the activity took place in a more delocalized market. In construction, we moved in the Archipelago without having the opportunity to take a leap, so we wanted to create a company capable of generating products with repercussions outside the Canary Islands.

That is easily understandable in theory, but how did this idea of ​​traveling from construction to here come about?

I went to the banks and they told me clearly that for construction, no matter how good the project was, everything was vetoed from the headquarters. We had people around us, such as medical sales representatives, through whom we realized that in the pharmaceutical sector it is not that they gave you great financing but the banks were willing to listen to you. Then we discovered that clinical nutrition was the field in which we could create our own products, because it was impossible to do it with medicines without great support; which we can now address shortly. It was a gateway where we only depended on our ability. Some banks were interested in the idea. It is a sector that cannot be affected by crises so drastically.

Where is Adventia Pharma present today?

Until now we distribute in the national market, we have taken a step towards Portugal and we are also introducing ourselves in Mexico and Panama, in the latter case through distributors. Our products have to pass, of course, very strong sanitary filters. It may take you two years to get in. More and more companies from all over the world interested in distributing the products contact us.

Are they considered pure research, development and innovation?

It is our hallmark. The largest companies do not have to investigate as we do. When they have a need, they can hire someone to provide the solution. In order to conquer a market niche, we had to do different things.

So is research and development possible here?

All the creative part of the company is addressed in the Canary Islands. To create and innovate you just need to waste time thinking, and that can be done perfectly here. Silicon Valley is a good example. What they do there is to sell it to everyone and that is what we do. When we present some of our products to doctors, on many occasions they ask us how it has not occurred to anyone before. Of course, we waste a lot of time analyzing problems and giving them a solution. Sometimes having a lot of money is your own enemy. If you grow, the numbers come out, the market works and you have a profitable business model, you are not interested in changing it.

And won't the time come when the same thing happens to you as well?

It is that what catches our attention is to detect problems and provide solutions. We have been brave, because starting to develop a medical device, for example, is not easy. It is true that everything costs money and you need to hire professionals and engineers to develop your idea, so you have to incorporate that team until the project becomes a reality. It is a great satisfaction to see that these ideas work.

What ideas did you have at the beginning?

We were looking for small innovations that might not seem important, but that had a direct impact. Upon reaching the market, a patient had to consume three or four boxes of between 24 and 36 packages for months. Five or six times a day it was the same flavor. As simple as introducing three flavors and preventing the treatment from being torture. We succeeded and even anticipated the legislation; we managed to change a royal decree that we were unaware of and apparently prevented that. Then we move on to the aromas, which allow to regulate the intensity, which avoids the metallic taste in cancer patients. And from there, to personalized nutrition, which allows the doctor to adapt the treatment and the patient to interact with the taste.

We try to make a great team in which everyone is happy. Everyone participates and feels they are protagonists of the project, with which we get them to stay despite receiving offers. By checkbook we cannot compete with the large multinationals, but we have other values.

And do they attract talent?

Well, there have been those who have left a multinational to come to work with us.

Delegates access classroom
For more information about our products, call us on the phone (+34) 928 223 717 or info@adventiapharma.com
Copyright © 2022 Adventia Pharma. Todos los derechos reservados.